Every time I venture back to my home city of Dundee, I’m always pleasantly surprised with the businesses that continue to pop up.

Hotel Indigo and its restaurant Daisy Tasker was definitely one of those. I had the pleasure of staying at the hotel during a media preview for the V&A last year and dined several times in the restaurant.

On Monday evening I got the chance to head along and try their new menu.

Named after a 14-year old weaver who organised social activities for the jute mill workers, the restaurant has an effortlessly cool vibe with the dulcet tones of the likes of Billie Holiday gently purring out from the speakers.

We were shown to a lovely booth boasting plush turquoise seats and a large black table capable of holding a veritable banquet if desired.

To start I opted for the salmon confit while my Gran had chosen the smoked tomato soup, mozzarella crouton and basil. I’m a big salmon fan and while I do cook it at home fairly regularly, I find it hard to resist when I see it on the menu. Unfortunately this dish was distinctly under seasoned and as it was served cold, I was left feeling a bit underwhelmed. The soup on the other hand was delicious had all the flavours you’d expect. I had definite food envy during our first course.

Mains came in the form of chicken balmoral with haggis, turnip, paramentier potatoes, leek and mustard and the pork fillet with puy lentils, black pudding, Amaretto and apple vinegar. When we were presented with these dishes, the waitress took out a small brown spray bottle and scooshed the pork dish while informing us, this was in fact the apple vinegar. It was a very unexpected touch of ceremony. For an injection of greenery, we added a side of broccoli with toasted almonds. 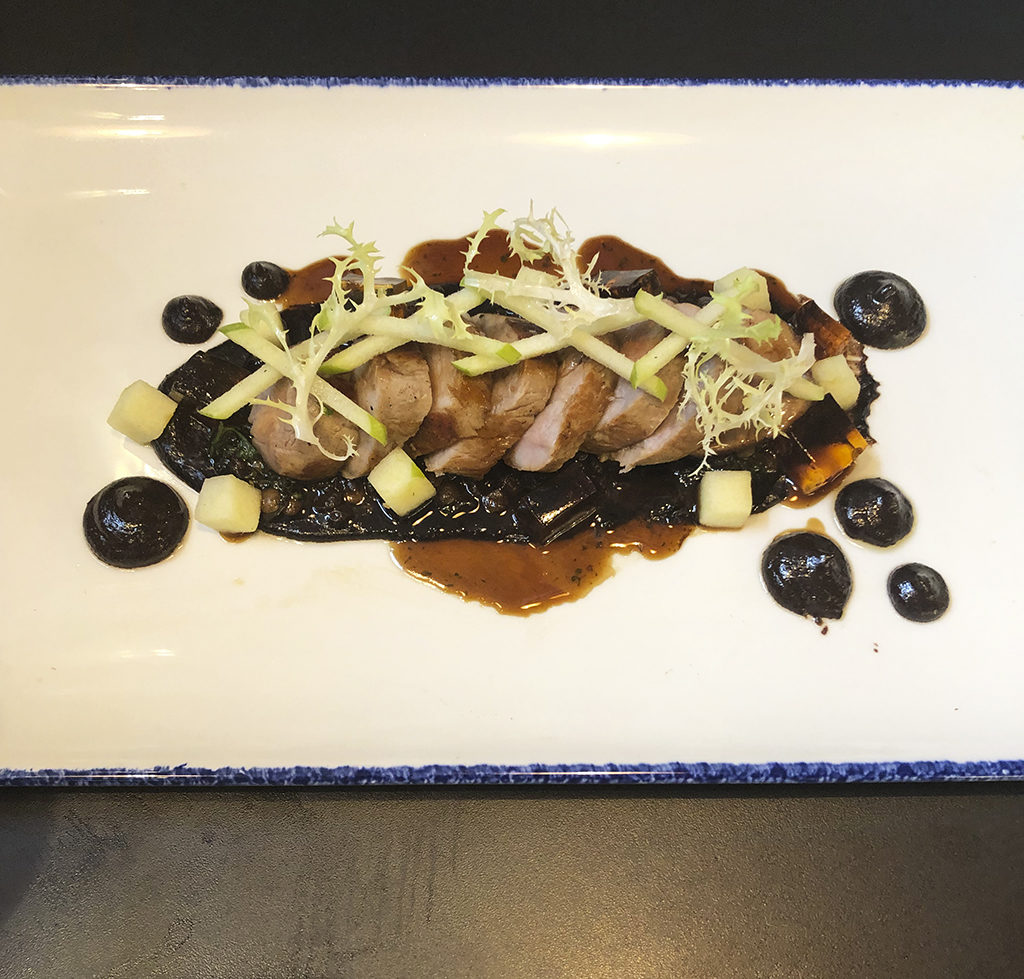 The chicken balmoral was a much daintier affair than you’d usually expect from this stalwart of Scottish dishes. There wasn’t quite enough bacon or haggis for my liking but what I did have I enjoyed. The potatoes were cooked perfectly and I didn’t have to add any additional seasoning. The broccoli was al dente providing a nice level of bite and texture to the meal as a whole and the almonds gave a nice balance of sweetness. My Gran’s pork dish was cooked well meaning the pork was succulent and tender, and I loved the puy lentils with black pudding. However, she remained a little unsure of the apple vinegar.

When it came to afters, I wasn’t quite ready to leave savoury town so I plumped for the selection of two Artisan cheeses while my Gran chose the blackberry trifle. When these arrived, I was left with a number of questions about the personal cheeseboard (or slate I should say) that had been put in front of me. The main question arose from the jet black cheese on the board. After asking our waiter, he returned to tell me it was ‘charcoal cheddar’. The second cheese was a brie and this was all accompanied with oatcakes, red grapes, celery sticks, red onion chutney and a butter which had a gentle flavour of horseradish. An explanation of my mini feast would definitely have been appreciated, not least to explain exactly where these artisan cheeses have come from.

The trifle was a creamy and boozy affair but wasn’t overpowering in its sweetness and it was comfortably polished off.

The service through out our meal was friendly and polite but a few extra touches would have made the experience really stand out.

Boasting a stylish bar, with a snug towards the back, Daisy Tasker also feels like the perfect place for a date night or a few cocktails and light bites with friends.

There’s room for improvement here but I’m sure wee Daisy herself would approve.

Ka Pao is Asian-inspired food that packs a punch

Ka Pao - it's a name that sounds like something from a 1960s Batman episode. Read More

Our recipe of the day is a pea panna cotta

With its seafood bias and focus on quality produce, Craig Millar’s @16 West End in St Monans will hook your attention and reel you in. Read More