Could the return of oysters to the Forth not only prove to be a boost for the environment but the nation’s sex life?

I have always adored oysters. My ex-husband and I had an agreement. If we were out for dinner and were given either plum pudding or oysters then for the sake of good manners towards our hosts, he would discretely eat my pudding whilst I would devour his oysters.

My loathing for Christmas puddings stems from school dinners when this heavy muck was served in a sickening bed of liquid suet; unfortunately the memory lingers.

My ex finds oysters equally repellent, though I never asked him if he would eat them cooked. That somehow misses the point. The pact worked well until the night at a particularly flamboyant dinner when we were dished up a dozen oysters each. Having astonished myself by consuming all 24, I can vouch for the fact that their aphrodisiac properties are dubious – maybe I just ate too many. Yet through the ages the humble oyster has earned itself the reputation for being sexually stirring.

Casanova claimed that his stallion staying power was due to his consumption of at least 50 oysters a day. In the 1940s, the American food writer, MFK Fisher wrote of Yale and Princeton university graduates who, ‘can tell of countless chaps whose powers have been increased nigh unto the billy goat’s simply from eating oysters.’

When Isadora Duncan was asked when she first learnt to dance, she replied that it was in the womb for during her pregnancy, her mother had been depressed and low, and would only eat chilled oysters and champagne, the food of Aphrodite the Goddess of Love.

Oysters are laced with zinc and other important minerals vital for topping up the testosterone, and their sweet, salty scent has often been likened to that of female pheromones. Many a randy old buffalo claims that oysters are more efficacious than Viagra, but when in 2007 an Australian oyster farmer added Viagra to his cultivated oyster beds, health officials refused to let him sell his products to Asians apparently eager to put the magical molluscs to the test. 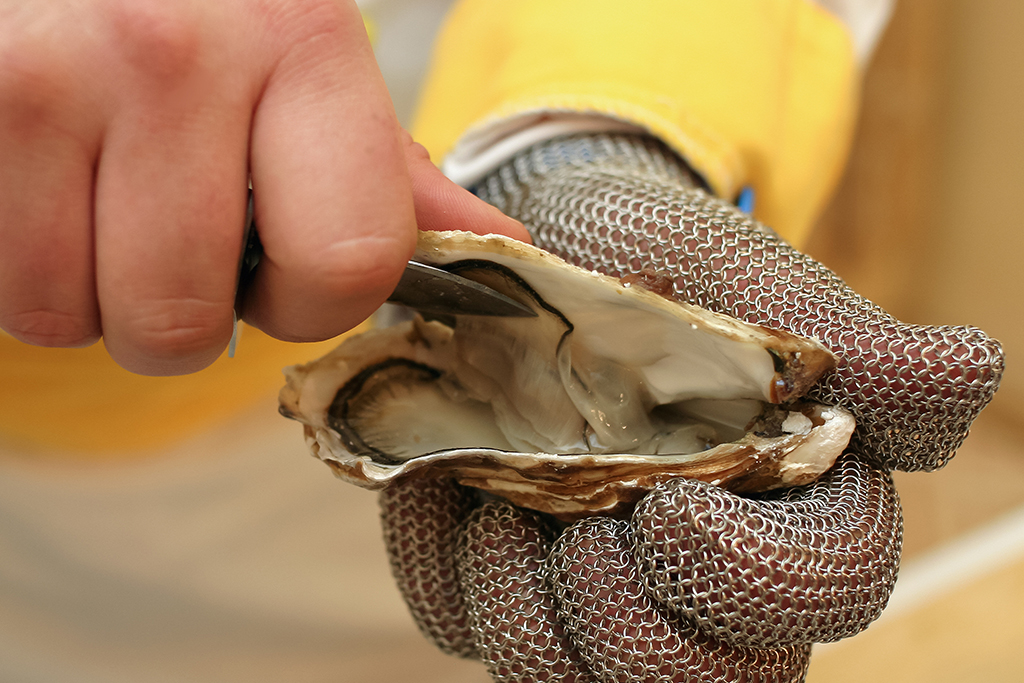 The makers of Viagra were equally unimpressed, and a lawsuit followed shattering the dream for marketing a new gourmet wonder food stuffed with libido-boosting properties.

Oysters themselves have a curious sex life. Hermaphrodites, they start life as males but can successfully change sex many times, largely depending on summer water temperature, an evolutionary brilliance that maximises their breeding potential. Our own native oysters remain the property of the Crown and it is illegal to fish for them without license from the Crown Estate, though there are a few rare exceptions where rights have been passed on.

Native oysters are now exceedingly rare in Scottish waters and found only in some suitable sea lochs on the west coast, and rarely off the east. They prefer relatively shallow waters and can on occasion live as long as 15 years.

Remains on Neolithic middens reveal that they have long been a part of the Scots diet and were previously a staple food of the poor. For centuries they were fished and cultivated; now there is only one remaining native oyster fishery, which is based around a narrow Galloway sea loch. From here the Loch Ryan Oyster Fishery Company carefully selects oysters that reach some of the most upmarket venues in the country, including Harrods, The Ritz and The Savoy, plus restaurants and bars with an elitist clientele, and some foreign markets.

Gone are the days when oysters were the premise of the poor. In Dickensian times a street stall would have sold three oysters for a penny. Oysters were fished in many locations around the British Isles and were cheap food.

In 1864, an unbelievable 700 million oysters were eaten in London. Today you are likely to pay a minimum of £3 each for a really wild oyster, also referred to as a flat or common oyster. Connoisseurs claim they are well worth it, but native oysters have been in sharp decline for over a century, threatened by pollution as well as poaching.

Most of the oysters consumed in Britain are cultivated Pacific oysters, Crassostrea gigas imported as tiny ‘spats’ and grown in special bags around the west coast. It’s a thriving industry which brings employment to remote areas. 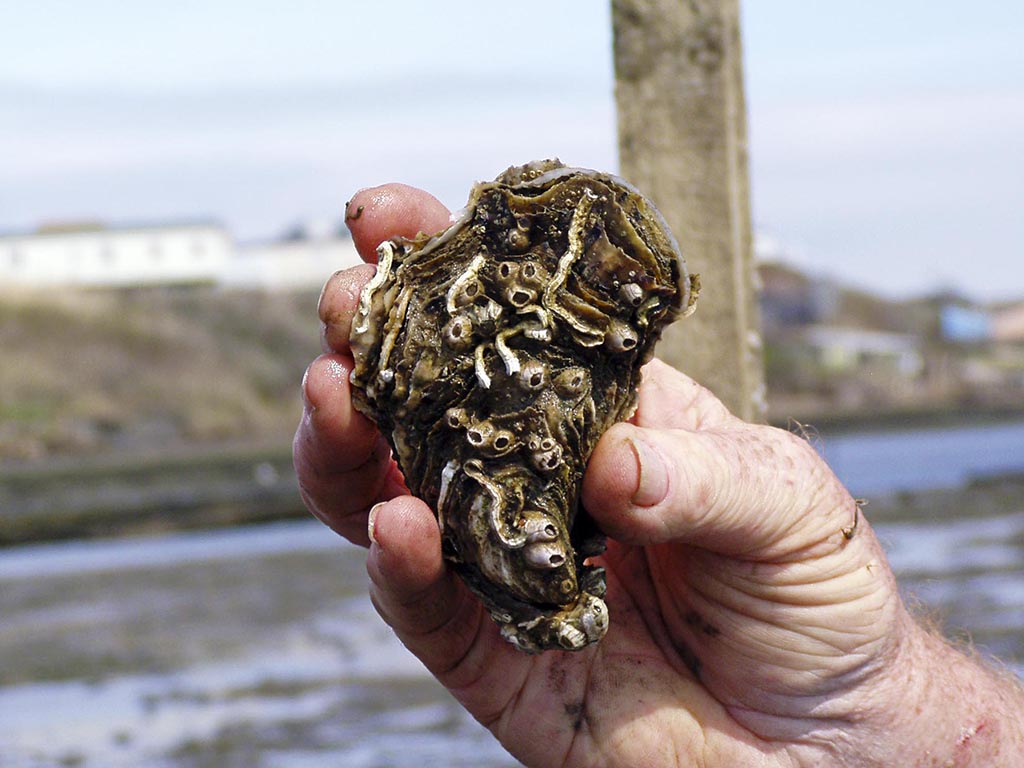 If you have never tasted our own native oysters, you will not be disappointed. The most notable native oyster fishery in Scotland dates back to the early 13th century in the Firth of Forth, once rich with beds, or ‘scaps’.

This vast area of around 50 square miles was once so abundant with oysters that 30 million were exported annually to markets around Scotland and England as well as abroad. They were also sold for growing on to provide young oysters to establish fisheries elsewhere.

Forth oysters were viewed as the finest anywhere and reputed to have a unique flavour and texture. They were carefully managed by the fishermen of Newhaven, who used small open boats to travel out to the scaps, and rakes to harvest only the largest. However, during the late 18th century, oysters became more fashionable which in turn led to disaster.

Greed and avarice intervened, with fishermen from outside the area using larger craft to dredge indiscriminately, a practise which would ruin a business that had previously been sustainable. Despite concerted efforts to protect oysters, with the commencement of a close season banning fishing in any month that did not have an ‘r’ in it, the fate of the Forth oysters was inevitable.

The Society of Free Fishers stepped in to act on behalf of the Newhaven fishermen to ensure that they could continue fishing their waters, but the council raised the cost of the oyster bed lease, making it prohibitive for the locals.

In 1839 the final hammer blow fell when the council sold off the rights to Englishman George Clark on a ten-year lease. Little wonder that when 60 dredgers appeared working from dawn to dusk it lead to the ruination of the fragile ecosystem. By 1870, the business was all but dead, and by 1920, the Forth’s famous oysters were a thing of the past as pollution and imported pests further added to their demise. 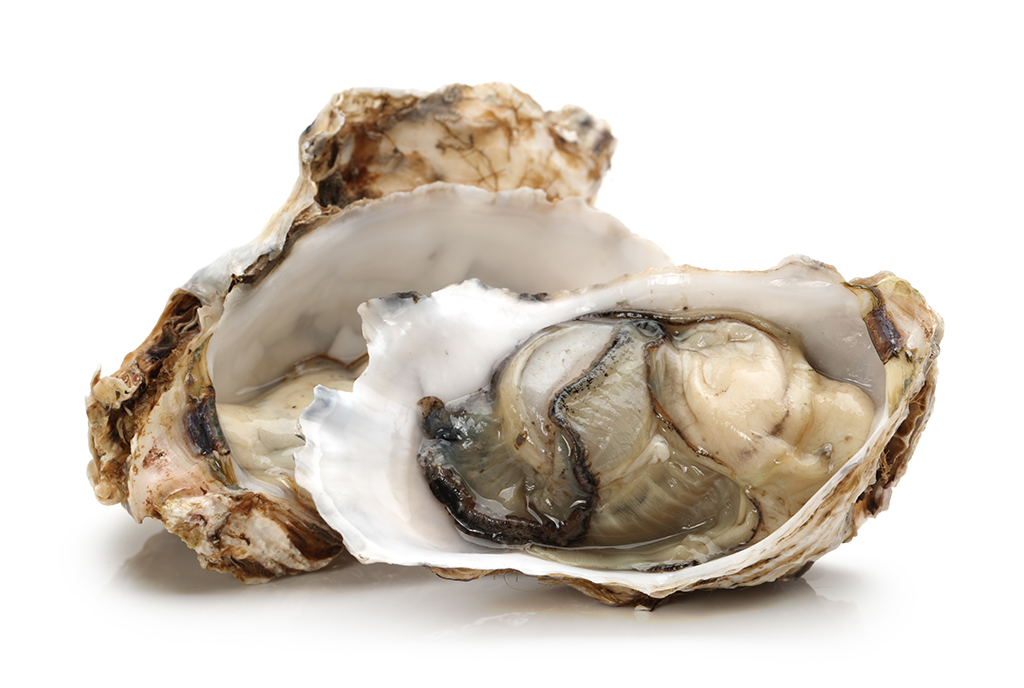 Are oysters really a romantic food?

A survey in 1957 reported tragically that native oysters were both commercially and biologically extinct in the Forth. With it the harmonious culture that had involved ‘dreg songs’ unique to the area and sung as the men worked, died too.

When Dr Elizabeth Ashton of Stirling University stumbled on what she thought was an oyster on a Forth beach in 2009, it was cause for enormous excitement.

There has since been further evidence that the extinct native oyster is indeed returning to its previous stronghold, giving hope that there could be a future once more for careful cultivation in the waters here. The exact location of the findings is a closely guarded secret but it is a reassuring sign that some oysters must have survived, and importantly that water quality is improving.

For gourmets, would-be Casanovas and those merely needing a little sexual restoration, that has to be good news, even if much of the oyster’s stimulating powers are probably psychological and equally about wine and ambiance as this extraordinary mollusc.

However, there are many Scots chefs who are certainly aroused by the prospect of dishing-up real Edinburgh oysters to their customers in the not-too-distant future. Unlike those filled with Latin blood, Scotsmen have never been renowned as the world’s finest lovers, though I would beg to differ.

Perhaps the return of this gastronomic treasure would not only boost the health of the nation’s sex life but also prove that with care, nature can and will bounce back.

(This feature was originally published in 2015)

The RSPB in Scotland has used hotspot mapping techniques to learn more about the life of kittiwakes, guillemots, razorbills and shags as they forage a... Read More

The drooping saxifrage – a flower of Scotland

Saxifraga cernua, more colloquially known as the ‘drooping saxifrage’ is a common alpine plant across the Arctic. Read More