As fantastic as the rat race can be, being able to get from A to B with ease, being within walking distance of the tube, and having a place that’s relatively calm to return to at night is – from a country girl’s perspective – a crucial part of the ‘Survival Guide to London’.

And while it may seem nigh on impossible to find a spot of peace in a city that never sleeps, (save retreating to far flung leafy suburbs), the next best for me is Canary Wharf.

Just a stone’s throw from Canary Wharf tube station, Lincoln Plaza Hotel is an ideal base for any of Scotland’s city slickers needing a central base, or indeed anyone north of the border who seeks a slightly calmer London experience.

Having stepped off a four and half hour train from Edinburgh and battled the Wimbledon crowds and Glastonbury stragglers in 34 degrees, walking into the cool, spacious hotel already felt like a treat.

Our room was on the 11th floor with expansive views across the city. A very welcome G&T with accompanying botanicals awaited us. 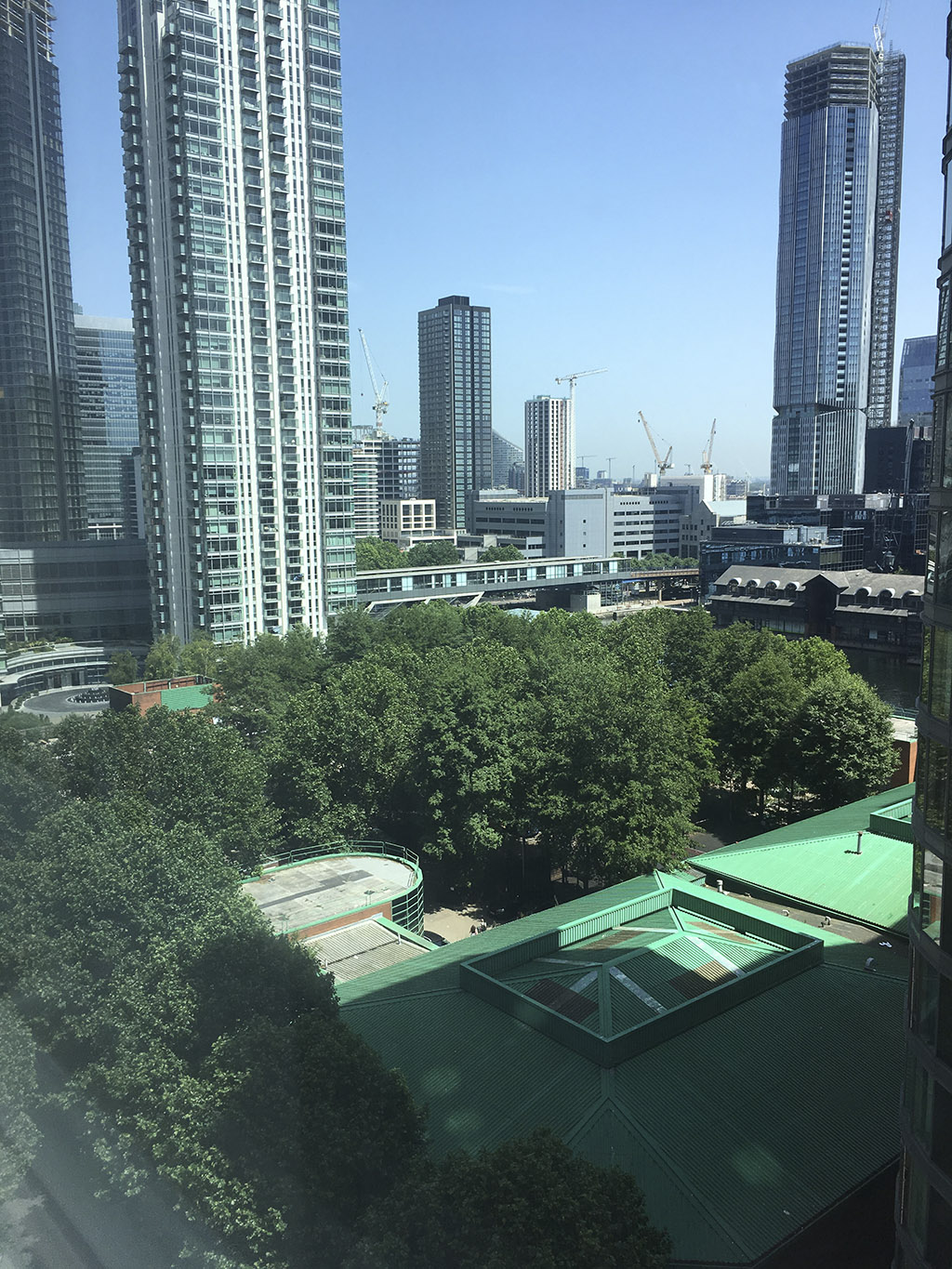 A room with a view from Lincoln Plaza Hotel.

The room was modern, light, clean and comfy, and but for a slightly tricky shower door that got stuck a few times, the standard was high. It even had the perfect full-length selfie mirror, (one for the millennials out there.) The full-length mirror, from my point of view, is such a crucial one, yet so many hotels out there seem to miss it from their rooms. So a big tick on that front.

Before heading to dinner, we went for a few drinks and nibbles in the on-site Jack Speak bar. My plus one opted for a refreshing Cucumber Collins, with Old Tom gin, brown sugar and homemade lemon and cucumbers sherbet, while I chose an equally thirst quenching Cane Daiquiri which has fresh sugar cane, Plantation Three star rum and lime juice. 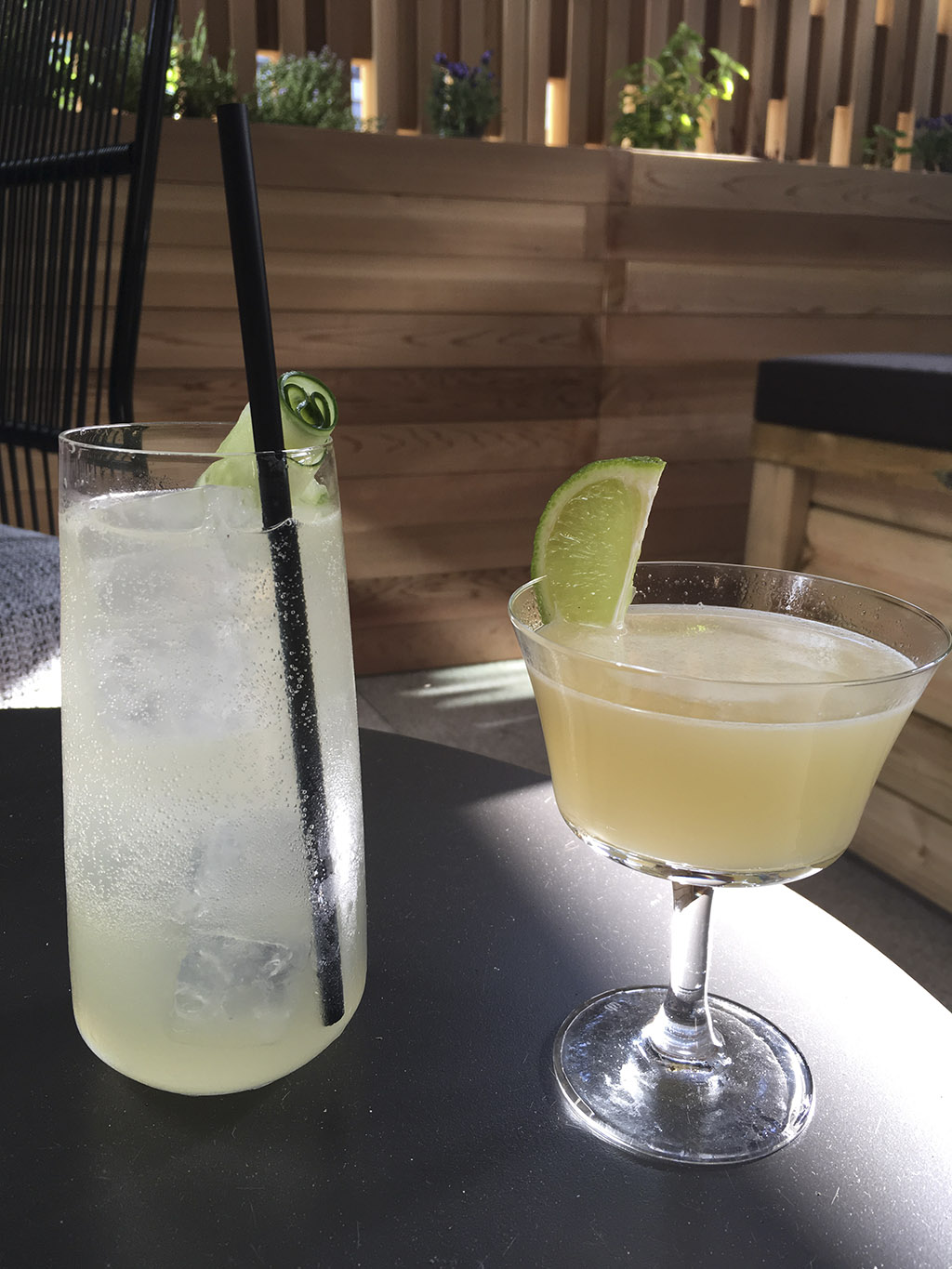 Sitting out on their terrace in a sun trap, we felt quite removed from the city streets. We decided to order some crudités and hummus, as well as some beetroot and coconut samosa chaat – both of us agreed that beetroot had never tasted so good. Earthy and spiced, this was a big hit and warmed us up nicely for what was to come in Mr Todiwala’s Indian restaurant downstairs.

The restaurant was beautifully designed, with sparkling copper pans hanging from the ceiling, a wonderful open-plan kitchen and additional touches of India around about. Having sought out a tasty, reliable Indian restaurant for quite some time, the expectations were high.

The service was flawless – all the staff were incredibly attentive and eager to please, and the head chef even popped his head out from the busy kitchen to say hello.

To start, we had a vegetarian sharing platter. Each item on the plate was bursting with flavour – a wonderful mix of sweet and spice. As recommended by our server, we saved the outside item until last. It was filled with chickpea, potato, mint, yoghurt and spices and we could have happily devoured an entire plate of them on their own. 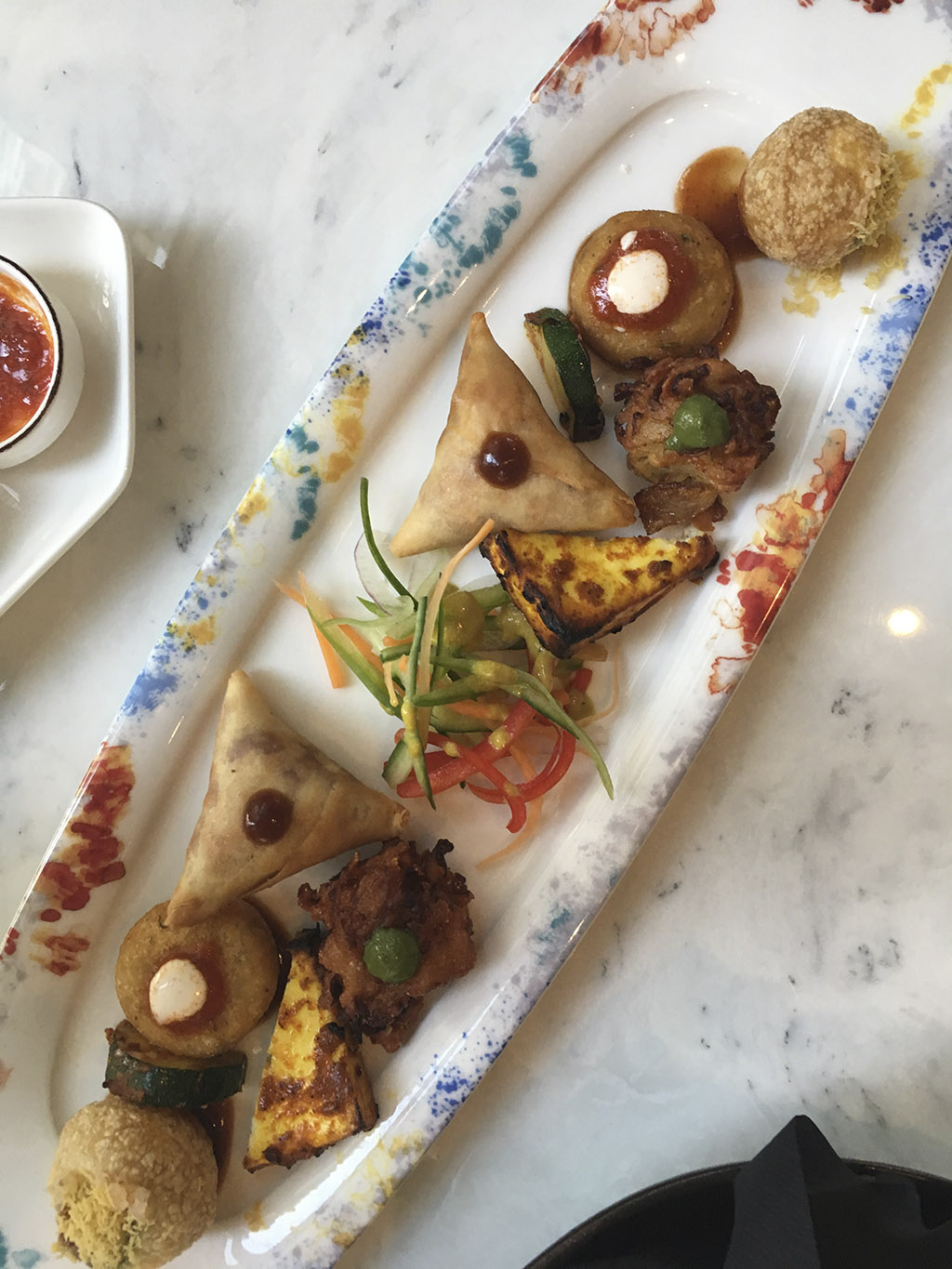 The vegetarian platter was a delicious introduction to Mr Todiwala’s restaurant.

We then had our mains – my plus one ordered the venison tikka aflatoon which packed a punch with star anise and fennel. The venison was sourced from the Heyes’ estate in South Devon.

As someone who believes you can judge a restaurant on its ability to cook a classic, I opted for the tandoor chicken tikka; and I was so glad I did. Well presented, but more importantly, very moreish. I can safely say it was the best tikka I’ve had in a long time – and I’ve had many curries in my time. It had a lovely kick of heat at the end of each mouthful. 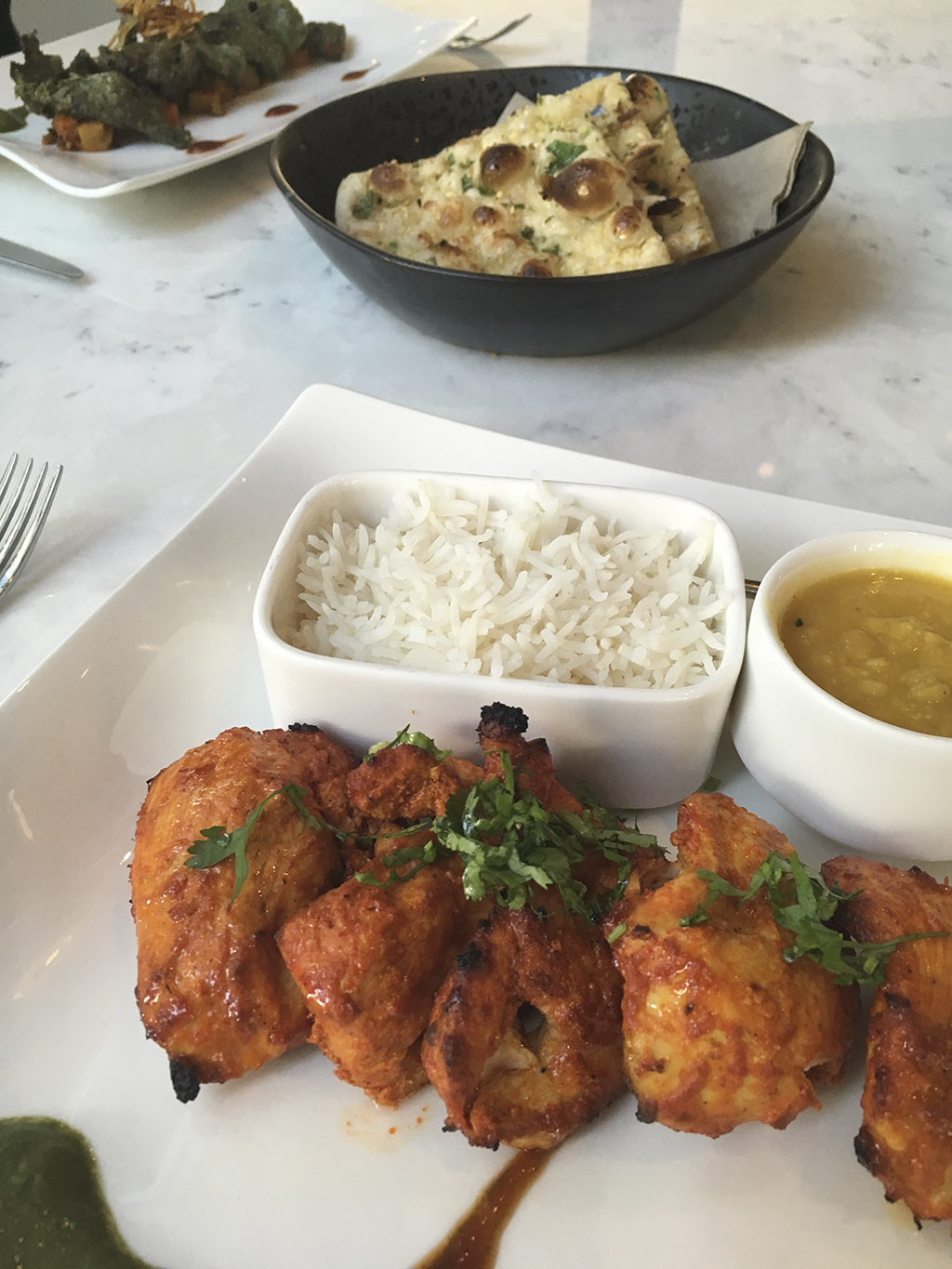 We shared the chilli and garlic naan, and though I’m sure we could have warned off hoards of vampires the following day, it won the prize for side dish of the day. Thin, crispy and soft on top – just as it should be.

To end the meal, our server recommended we try traditional Indian street food, called kulfi, which is a form of ice cream that comes in an array of unusual flavours – pistachio (my plus one’s favourite), rose and cardamom (my favourite), honey and saffron, hazelnut and chocolate, it was a nice palate cleanser. We also tried some sweet Bebinca, which is similar to a pancake and is made with coconut milk and nutmeg. 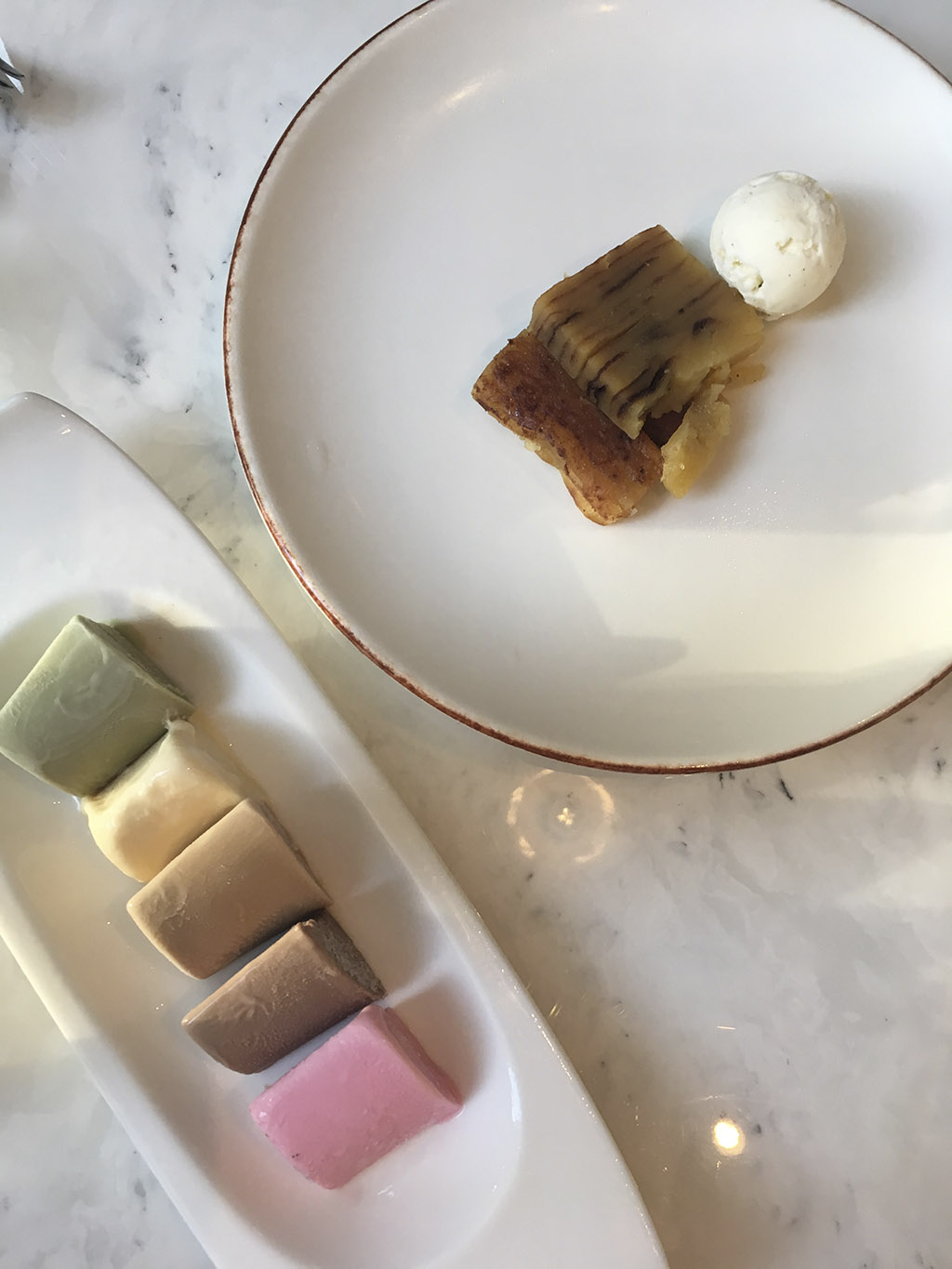 Traditional kulfi and Bebinca, pancake batter made with coconut milk and nutmeg.

Traditionally it takes around six hours to make Bebinca, and though I’m not sure I’d spend that long making it myself, it was a delightful way to end the meal. We were served a fruity, floral dessert wine – Domaine de la Pigeade Muscat de Beaumes de Venise, from Rhône. Though generally neither of us would ever order dessert wine, it was certainly a sound recommendation for those who enjoy a sweet tipple to end a meal.

We went away very full, having been introduced to some new aromatic flavours, and agreed that recreating such a wonderful menu at home would be a task and a half. We’ll certainly be back, and for my plus one who’s a local, the takeaway option will certainly be tapped into on a regular basis.

The fact that they support British farmers really appealed to me, and they also make sure to select produce based on their environmental impact. As an Edinburgh girl, the premium added to any bill for the pleasure of dining in London always comes as a slight surprise, but it was certainly no more than any other dinner out in the Big Smoke. Besides, the food was well worth it.

After a cosy night’s sleep, we went to The Food Store for breakfast, and while the food was well presented and the produce was clearly selected for its quality, be prepared to have a leisurely start. With quite a lot of confusion with both food and drink orders, the service left us a little underwhelmed.

Despite that, the overall Lincoln Plaza stay was lovely. For visitors with a little more room to breathe in terms of budget, I would certainly recommend this as comfortable base in London. Coming back to it after a long day jollying round the Big Smoke, it felt homely and welcoming.

To find out more, visit the Lincoln Plaza Hotel website.

Mr Todiwala’s Restaurant can be found here, and for Jack Speak, click here.

Merchiston offers a focus on knowing its pupils

Tiree Music Festival has revealed that the event has contributed £6. Read More

The awards ceremony for the annual Wigtown Poetry Prize has celebrated the strength and vibrancy of poetry in all three of Scotland’s indigenous lan... Read More