Scotland’s Hotel of the Year has been revealed as a Perthshire family business.

East Haugh House in Pitlochry, a four star boutique country house hotel, took home the top award at the second annual Prestige Hotel Awards, presented by Allied Irish bank, in Glasgow.
They were named as Scotland’s ‘Hotel of the Year’ at the 2018 Prestige Hotel Awards.

Over 18,000 votes were cast to find the best of Scotland’s hotel trade; competing venues from across the nation were whittled down by public vote, then judged by an independent judging panel who visited each of the hotels. 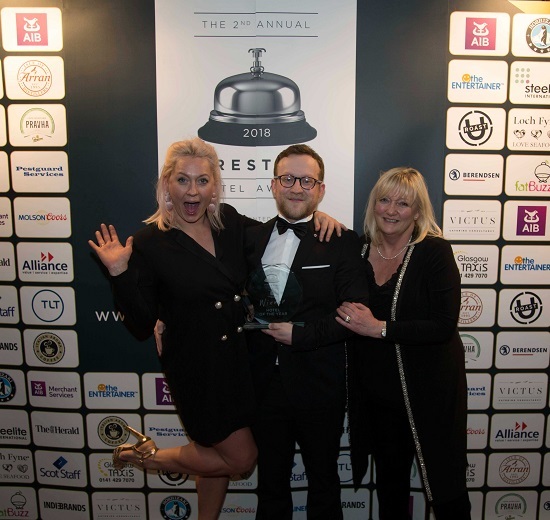 Bought in 1989 by husband and wife team Neil and Lesley McGown, the 17th century country house was lovingly converted into a luxury 12 bedroom hotel and restaurant, and has established itself as a popular destination for tourists from the UK and overseas.

Steven Dobbin, the general manager, joined East Haugh House from Cameron House in 2016, and attended the glittering awards on Sunday along with owners Lesley and Sophie McGown.

Lesley, proprietor of East Haugh House, said: ‘We are absolutely thrilled and honoured to have won the main award of Hotel of the Year at the 2018 Prestige Hotel Awards.

‘After almost 30 years in business, this recognition couldn’t be a more fitting accolade. It reflects our fantastic team’s dedication to delivering a very personal service for our guests with first class hospitality and exceptional food.’

There’s no resting on their laurels at East Haugh, as they are hosting their first Scottish tapas night on Saturday,17 March. The menu will feature contemporary tapas-style dishes, with a focus on flavour and creativity.

Today, the original Kinross branch of the charity shop run by Children’s Hospices Across Scotland – better known as CHAS – was commended by vari... Read More

Marking 100 years since the signing of the Armistice, the finishing touches have been added to Edinburgh’s Floral Clock. Read More

Dog owners reminded to keep their pets under control

Scots dog owners are being reminded to keep their dogs under control when they are out in the countryside. Read More