During research to identify the great salmon fishers of the River Dee and River Spey it was noticeable that ladies featured prominently on the Spey.

But not so on the Dee, how curious.

I have notes on nine Speyside ladies who have reached the holy angling grail of landing a 40lb salmon. But to my knowledge not a single Dee fisher of the fairer sex has attained this measure of success. Miss Pickering, Laird over two prestigious Deeside beats near Potarch, came close 100y ago with no less than four over 30lbs; but the largest was a tantalising 1½lbs light of the magic mark.

Experts might say the Spey always had more big fish than the Dee, personally I’m not so sure. I believe more fishing records have survived for 21st century examination in the former which may in part account for the anomaly.

But, if one visits the old stone fishing hut at Middle Drum on lower Deeside there on the wall hangs a revealing hardwood plaque depicting all fish weighing over 30lbs since the year 1895. Although ladies don’t feature amongst the lucky anglers there are no less than six 40-pounders, and this is but a short stretch of river. 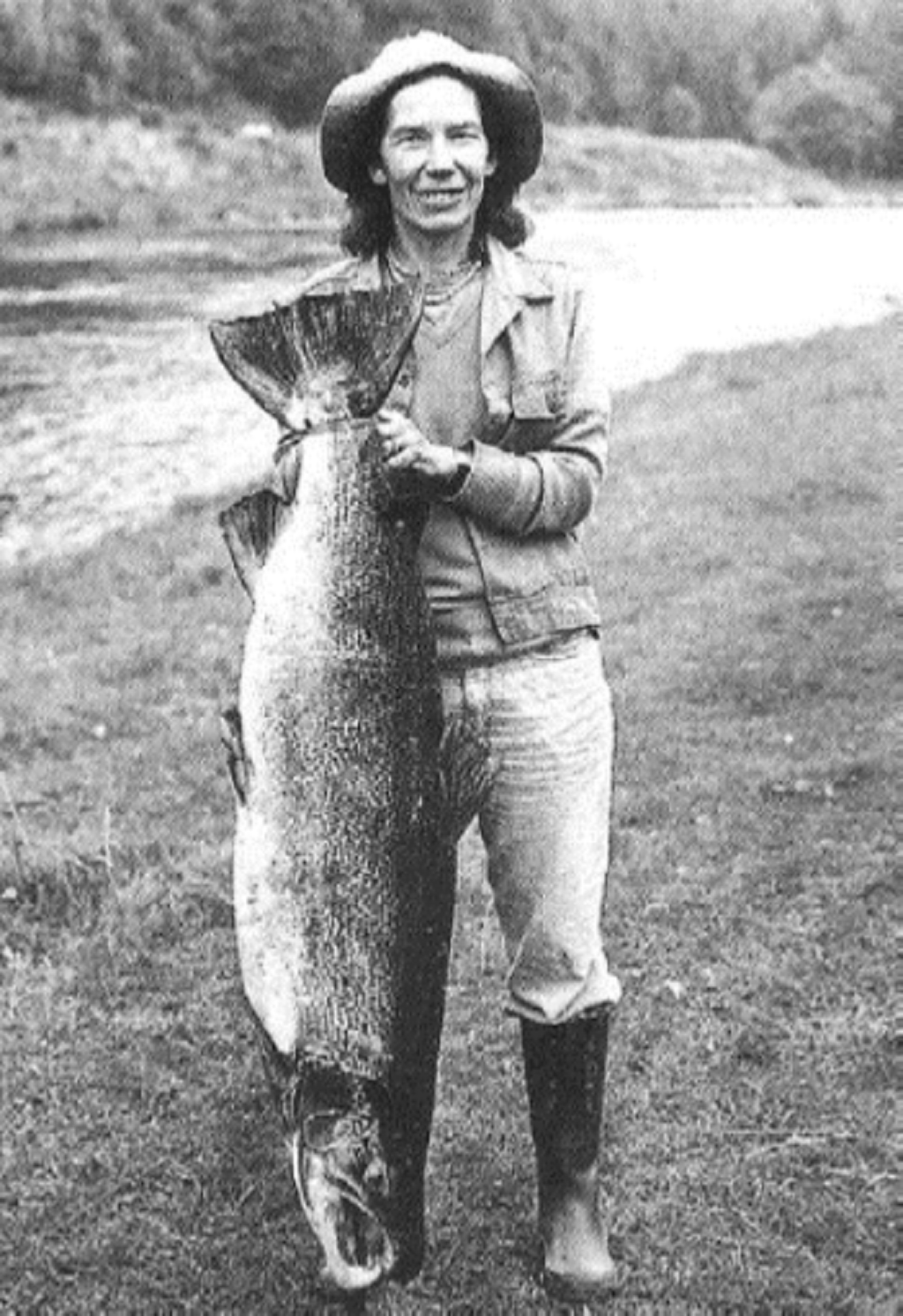 That great sage of piscatorial history, Augustus Grimble, described in full the angling successes on the Gordon Castle estate on Speyside. He reckoned ‘that this is the finest and most productive water in Scotland.’ Records go back to the 1880s but unfortunately those between 1920 and WWII have been lost.

Fifteen 40-pounders are on the list for these nine miles of prime fishing incl two 50s, significantly longer than Middle Drum. Three of the 15 were caught by ladies, Mrs Sassoon was the first with a fish of 42lbs in 1897 from a pool called Stynie, no longer recognised but probably somewhere near the Quarry Pool below Fochabers Bridge.

Lady Bernard, great-grandmother of current laird Angus Gordon Lennox followed with one of exactly 40lbs in 1911. This was caught in the Essil Pool not far above the old disused railway viaduct. 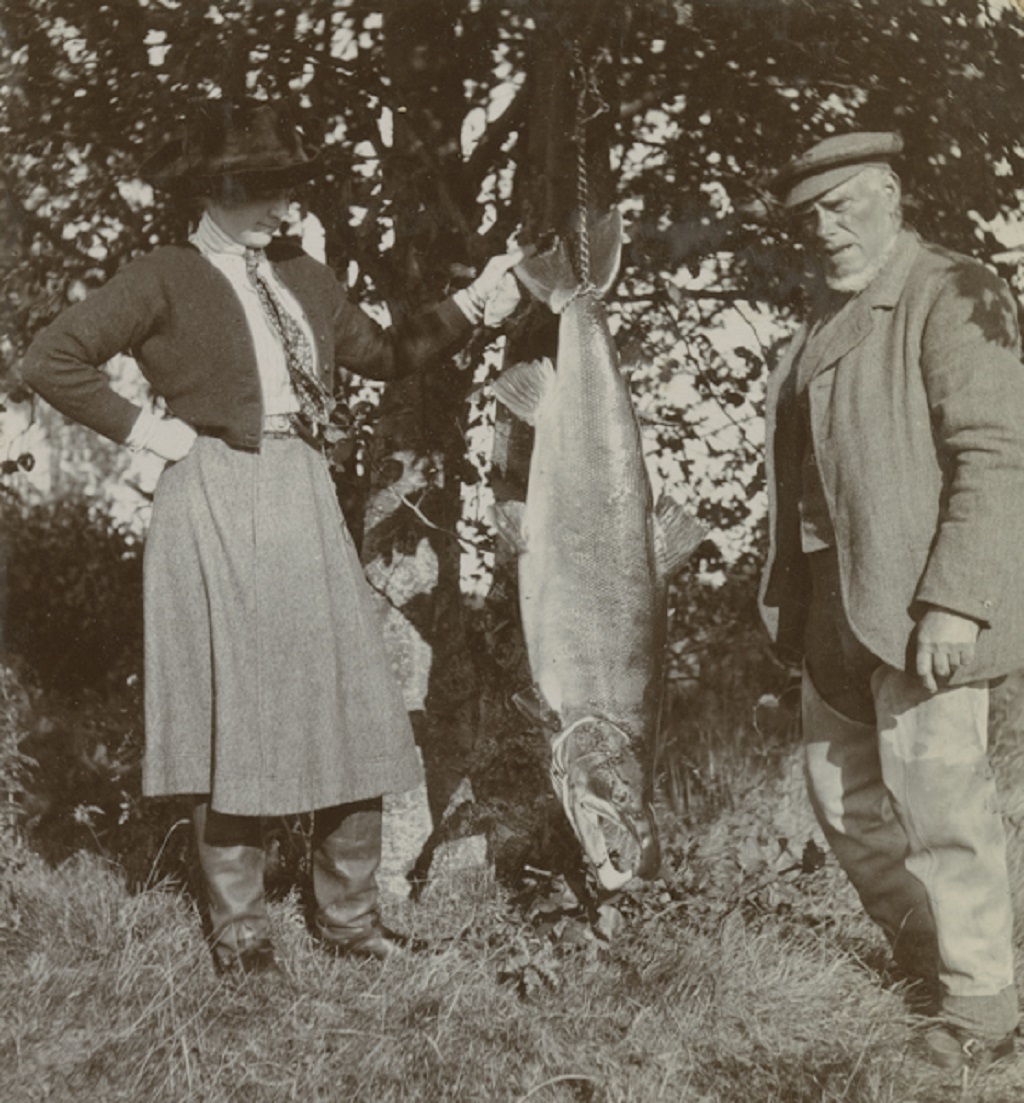 Lady Bernard Gordon Lennox with her 40-pounder in 1911

Then came a fish of 47lbs by Miss Phyllis Spender-Clay in 1919. Aged just 14y this surely stands as one of the most accomplished feats in angling history as that was the only method allowed by the Duke of Richmond at Gordon Castle.

What of the other big-fish females of Speyside? In chronological order, the next sockdolager was one of 40lbs caught by Miss Holt on the Tulchan water in 1933. This fish was hooked on a Dusty Miller and the fight lasted over 4h finally ending nearly one mile downstream before being gaffed out by her ghillie, Anderson.

Then we come to the Duchess of Northumberland, an expert fisherwoman and no stranger to big fish having landed two 30-pounders on the Spey when still in her teens. Her Grace eclipsed this with one of 40lbs in 1947 from the renowned Delfur beat. The fish took 40 mins to land and was hooked on a Crow Fly; apparently it marooned itself on a big rock mid-river but fortunately kicked itself back in the water and all ended well.

In April 1953 Lady Mexborough landed one of 41lbs on the Braes from the Otter’s Cave, caught on a fly tied by herself. Like the Duchess, Lady Mexborough was an accomplished fisher; in two consecutive April days 1958 she landed 17 and 21 salmon, all on the fly. Extraordinary by anyone’s standards.

She is pictured below with her ghillie John Burgess.

Two 40-pounders caught by ladies come from the renowned Cairnty Pool at Orton. What’s more, they were mother and daughter. Mrs Smith Grant’s 41lb fish was caught in May 1952 on the fly and her daughter, Mrs Gillian Straker landed one of the same size some six years later in April 1958. Her son, Hugo Straker, tells the amusing side of these incidents: ‘My Grandmother was “furious” that my mother had equalled her big fish but took enormous delight by reminding everyone that her one had been caught on the fly!’ This fact was emphasised in her records. 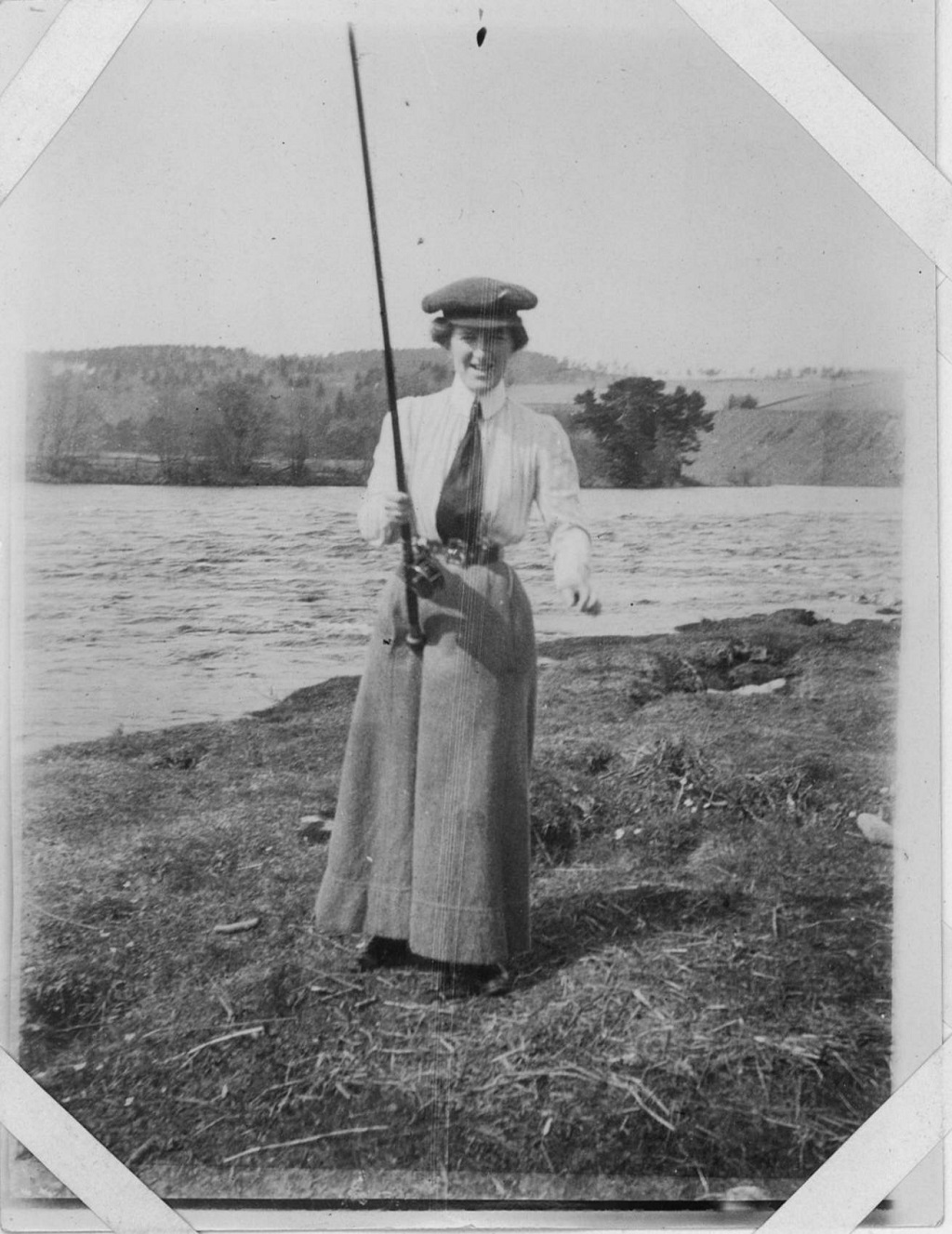 Miss Pickering on the Dee in late Victorian times

The ninth and most recent fish on the Spey Ladies list was caught by Mrs Lilla Rowcliffe, well known angler on the Oykel in Sutherland, on the Adaldal in Iceland and also in Patagonia. Lilla can be forgiven for catching her monster while spinning as the fish was only her fourth or fifth salmon she told me. Caught in September 1996 when she was 60 she was on the Delagyle beat not far upstream from Aberlour. Lilla is still fishing and only last year appeared on BBC Scotland’s Turas a’ Bhradain

My own thoughts are that the Spey, and Gordon Castle at Fochabers in particular, had for some unexplained reason a history of ladies in the Gordon Lennox family who liked to fish for salmon and weren’t content to let their husbands/brothers have all the fun. This culminated in Helen Northumberland who by landing a 40-pounder may, unwittingly or not, have encouraged other ladies to fish. I can find no equivalent for such on the River Dee.

Opening of salmon fishing season on the River Tay

Rural organisations have said that the recommendations of a government-commissioned review of grouse moor management will mean a ‘seismic’ change ... Read More

Trying his hand at the dying art of punt gunning