An innovative textiles enterprise is about to take shape at its new home in Ross-shire.

Textile design, manufacturing and product creator business Prickly Thistle has built an international clientele since 2015 and is now set to start work on the conversation of a Black Isle farm steading to create The Black House Mill, what will be the only textiles weaving mill and innovation centre in the mainland Highland region.

As an interim step, the company opened a ‘pop up’ weaving mill in Evanton in April 2018 after the company uncovered demand for its products across the world. This mill has allowed Prickly Thistle to not only build a global customer base but also reintroduce the skills needed to run an enterprise like this in the region.

Founder Clare Campbell explained: ‘The final run of a planned three crowdfunding campaigns is now live, allowing the company’s supporters to once again buy from an exclusive and limited edition collection of products made at our mill in Evanton.

‘The profits from this should allow us to put the full funding package together to realise the dream of having our own permanent home for our bespoke textiles innovation centre and mill at Culbokie, just over the water from the pop up mill location.’

As well as exporting products around the world over the past year, the company has also worked with local clients such as Tomatin Distillery and Runrig to design and then weave their own tartans, including supplying finished goods in their own cloth.

At the same time, the Evanton mill has also allowed the business to develop new weaving styles and designs. 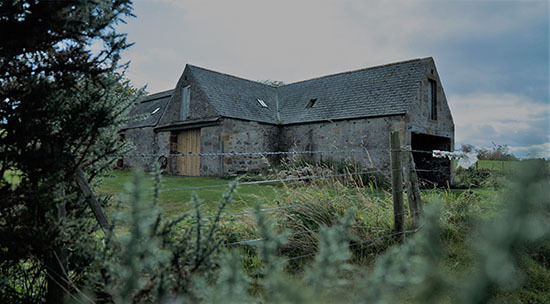 Clare, 41, who previously worked as a Chartered Accountant, said: ‘We like to think we have a bit of the rebel in us.

‘What we discovered was that in the tartan textiles industry, many of the same techniques and patterns had been used for centuries – as a result we gave our team the chance to introduce some rebel thinking to this to see if we could disrupt the industry in a good way, avoiding displacement across Scotland and create a new market.’

The opening of the new mill has also brought new employment opportunities to what was seen by many as a moribund industry. Over the past two years, the company has grown from Clare working alone to now having a team of ten, including a previously retired loom engineer who ensures that the techniques needed for working the company’s traditional looms are being handed down through the generations.

Clare continued: ‘The best bit about having our own mill was that we were able to blend the old with the new. This has allowed us to introduce product designs for this campaign that have never before been a focus using traditional machinery.

‘The other outcome has been that we are now seen as leaders in the fight back against ‘fast fashion’. All our products are made to order and are literally designed to last a lifetime – in the way that textiles made in the Highlands have always been.”

To showcase the innovation that the team has been working on, included in the range available online for this campaign are ‘X marks the Rebel Braces’ and ‘O say the Rebel Belts’ and textiles products made in the company’s new Rebel Weave, Thistle Weave, Slate Weave and unusual WD1250 Weave which have already won plaudits from industry experts.

Clare concluded: ‘At Prickly Thistle, we are creating what we proudly call a brand of endurance for Scotland, where values and principles are core to every decision we make.

‘We are continually inspired by other global brands who champion the same, such as Californian based Patagonia. This final step towards our own innovation and weaving mill will allow us to take another big step forward on the road towards this goal.’

Sustainable gifts for lovers of the outdoors

Ethical shopping is high on many a wish list, but it can be tricky knowing where to start. Read More

A Scottish-based artist has created the Christmas card for a leading outdoor clothing firm - using a pheasant feather. Read More