Every time you switch on your television, it’s all thanks to a Scotsman – John Logie Baird – who was born 130 years ago.

Born in Helensburgh on August 14, 1888, John Logie Baird was the first man to transmit moving silhouette images on his mechanical television he named ‘The Televisor’.

Baird’s early life was troubled. The youngest son of a Church of Scotland minister, he rebelled against his heavily religious upbringing, though remarkably his father allowed him to adopt agnosticism and they would often debate their contradictory beliefs.

Home life was sufficiently comfortable for Baird to be able to experiment as an inventor from a young age and he is known to have rigged up a telephone exchange from his own bedroom to a friend’s house across the street.

In 1913 he attended Glasgow and West of Scotland Technical College until the outbreak of World War I in 1914. Baird was eager to enlist but ill health rendered him unfit for action, so he took a job at Clyde Valley Electrical Power Company. He struggled with his health, repeatedly suffering from terrible colds and flu-like infections. It is now thought that he may have had undiagnosed hyperthyroidism, perhaps made worse by the heavily polluted air of industrial Glasgow.

After the war, Baird moved to Hastings where he set to work inventing the first television. He knew that several others were trying and had come close, so there was a certain urgency to his work.

His breakthrough came in 1924 when he managed to transmit a flickering image from a few feet away on his ‘Televisor’, which was concocted from a hat box, a bicycle light lens, a tea chest and sealing wax.

Not altogether surprisingly, one day his makeshift television nearly electrocuted him, resulting in his landlord evicting him from his lodgings.

Later, he would recall in his memoir Sermons, Soap and Television: ‘I received the full force of the 2,000 volts through my hands. It was amply sufficient to cause death, but I was lucky. For a few seconds I was twisted into a knot in helpless agony and then fortunately fell over backwards, breaking the circuit and saving my life. But I shall never forget the agony of those few seconds. Electrocution must be a terrible death…’

Baird then moved to London’s Soho and it was here that he began to experience real success with his invention. In April 1925, the department store Selfridges hosted the first public demonstrations of his mechanical television displaying moving silhouette images.

Despite this publicity he was fast running out of money and was ever nervously conscious of others in the field making steady
progress.

Then, in the first week of October 1925, came his breakthrough. Everything functioned properly. He used a ventriloquist’s dummy named Stooky Bill, whose brightly painted face had greater contrast than that of a human face, and made it move and talk before the scanner.

‘The image of the dummy’s head formed itself on the screen with what appeared to me almost unbelievable clarity. I had got it! I could scarcely believe my eyes and felt myself shaking with excitement.’

This event was the first ever transmission of a proper television picture and is commemorated today by a blue plaque mounted on the wall of 22 Frith Street, Soho, London. Some observers were enthusiastically astounded, others refused to believe it – the editor of the Daily Express branded him a lunatic – but regardless of the reactions, the mantle of fame had landed on his shoulders. John Logie Baird was now a celebrity.

He would reflect, decades later, that he regretted not taking fuller advantage of his new unexpected status.

‘I turned down all sorts of invitations and continued to shuffle around in the lab in a state of dirt and dishevelment, absorbed in my bits and pieces,’ he wrote. ‘I paid for my carelessness later on, when big business got hold of television and of myself. Oh, why did I not cash in while the going was good?’

In 1927 his television was demonstrated over 438 miles of telephone line between his labs in London and a hotel in central Glasgow, and in 1928 his company, The Baird Television Development Company Ltd, achieved the first transatlantic television transmission between London and New York. Later that year, Baird became the first man ever to demonstrate colour television.

He installed the first television into Downing Street and received a personal letter of thanks and praise from Prime Minister Ramsay MacDonald, saying, ‘What a marvellous discovery you have made!’

By 1931, Baird was at the height of his fame and the BBC were doing regular broadcasts using the Baird 30-line system, including outdoor transmission of the Derby that year. On a trip to New York, much to his dismay, he was met at the pier by a parade of pipers and a police escort. 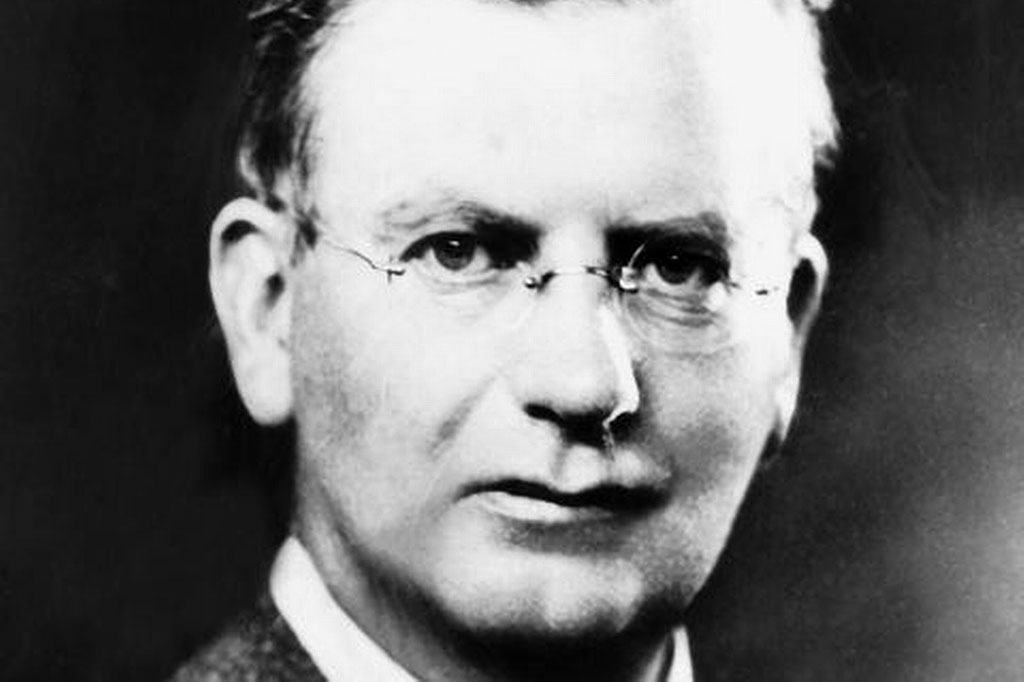 John Logie Baird died in 1946, and was buried in Helensburgh

‘As the boat approached New York harbour I was surprised to see on the Pier a body of Highland pipers marching up and down with great elan to the skirl of the pipes. These wretched men proved to be a gang of comic opera pipers from the Ziegfield Follies. A misguided but enthusiastic American publicity agent had arranged to give me a real Scottish reception.’

He had also invited a young pianist, Margaret Albu, to join him. They married a few weeks later on Coney Island. She was 19 years his junior.

The BBC Television Service used Baird’s 240-line system for many years, however, in 1936, after a three-month trial, the system was abandoned in favour of exclusive broadcasting with the 405-line monochrome analogue television broadcasting system developed by Marconi EMI.

This was the first fully electronic television system to be used in regular broadcasting and was adopted by the BBC until the 1960s. Baird was furious. He felt that Marconi’s sophisticated publicity department had successfully established in the public mind that Guglielmo Marconi had invented the television.

At the outbreak of World War II, the BBC stopped all broadcasting for fear of giving German bombers navigational aid from the signal. Baird continued to experiment with television innovation, exploring the possibilities of facsimile, colour and three-dimensional televisions. He gave a demonstration of the first fully electronic colour television in 1944, but after this his perpetual ill health took its toll.

Baird and his family returned to Bexhill-on-Sea towards the end of the war where he suffered a stroke in February 1946 and died a few months later. He was just 57. He was taken home to be buried beside his parents in Helensburgh cemetery, where his father was the minister.

Artist Alec Galloway has a heart of glass

The colourful creations of legendary stained glass artist Alec Galloway are admired across the world from Ayrshire to the Emirates. Read More