Wildlife photographer Laurie Campbell has spent two decades on the trail of Scotland’s much loved but extraordinarily elusive creature, and has published a book of superb images documenting his quest.

One still May evening back in 1993, there was a ripple on the surface of the River Tweed. A sleek shape was moving upstream, slipping in and out of the plants at the water’s edge.

Photographer Laurie Campbell was watching from the bank – he’d been out looking for badgers at dusk and the movement in the water caught his ever-watchful eye.

In the last of the light he could just glimpse a small head and the arch and roll of a smooth back before it disappeared from view. It was enough to know: otters had returned to the Tweed.

There wasn’t enough light to take a photograph but the image will always remain in his mind’s eye. It was one of those pivotal, full circle moments when the threads of a story come together: here was a subject so central to his work becoming a part of the river that was so central to his life. That first encounter launched him on a new quest: to get acquainted with these river-dwelling otters and to create a photographic record of their lives, right here on his home river. 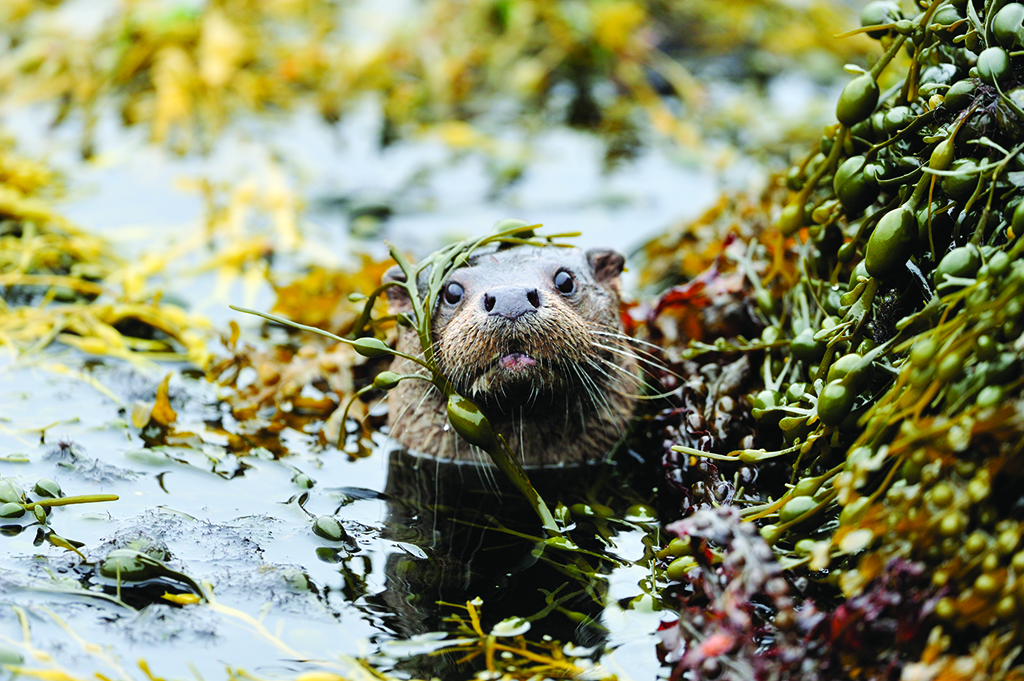 Laurie was born in Berwick-upon-Tweed and spent much of his childhood exploring the riverside, walking for miles along its banks, watching, learning the names of the plants and birds and animals that lived on and around the river. Even as a schoolboy he witnessed events that others rarely saw – the heavy grace of herons flying in to roost at dawn, over-wintering long-eared owls in a blackthorn thicket, badger cubs first emerging from their sett.

It was these experiences that led him to become Scotland’s first full-time wildlife photographer: it wasn’t enough just to see these things or to experience the enchantment of the wild, he wanted to bring something back to show and to share, and he found his medium in photography.

And so Laurie set out in the early 1980s as a professional wildlife photographer, exploring Scotland’s diverse habitats and hoping to record as complete a catalogue as possible of the country’s wildlife. Otters were an appealing subject matter from the beginning as there were very few photographs of wild otters then; most available images had been taken in wildlife parks or other captive situations. This was partly because there were so few wild otters: our only native otter, the Eurasian otter Lutra lutra, had largely disappeared from most of its former range across mainland Britain and much of Europe.

Otter populations had collapsed by the 1970s, due to pesticide poisoning as well as widespread habitat destruction and increasing road deaths.

However, the wild, rugged sea lochs of Scotland’s western seaboard and islands remained a stronghold for otters throughout this time. So when Laurie set out to find them he returned to the scene of his first otter sightings from childhood holidays on the remote Ardnamurchan peninsula. 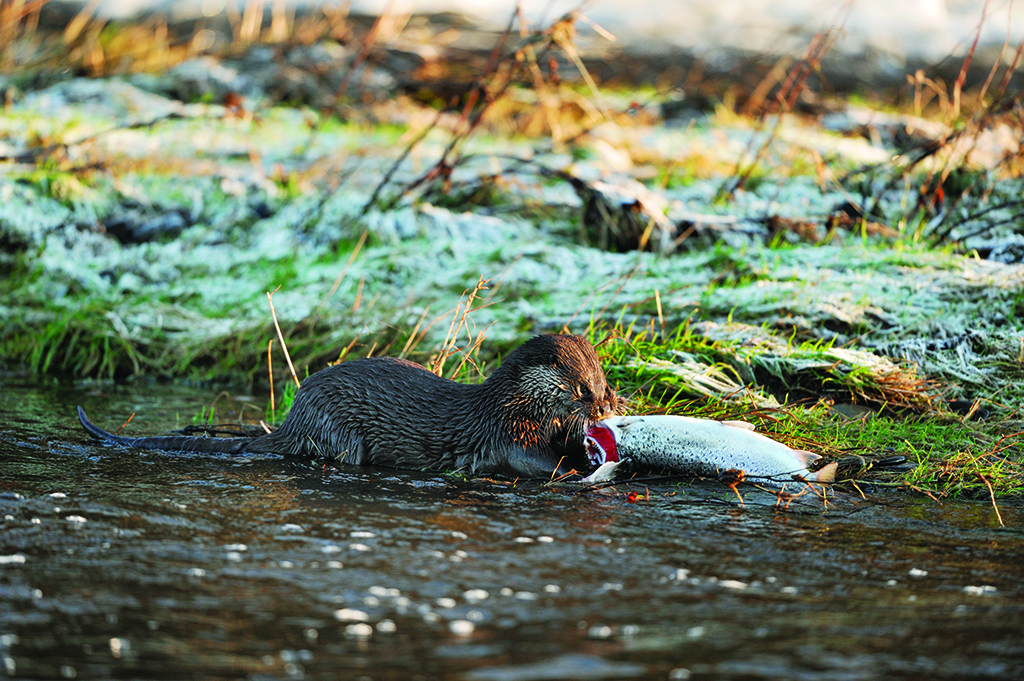 Tucking into supper by the banks of the Tweed (Photo: Laurie Campbell)

There he took his first photographs of wild otters and honed his skills for spotting otters on the shore. He learnt to work with the rhythm of the tides and to go looking for otters when the tide was falling or rising and the kelp beds were exposed. He could spot their sleek forms in the sea or shore, anticipate their movements and read the wider landscape for signs of their presence.

Laurie’s life fell into a pattern that he calls ‘commuting’ – heading off for long field trips to remote locations in the Highlands and islands and then returning to the Tweed to work his home beat. He continued to explore his own habitat with the intensity and curiosity of his childhood, still fascinated by the wild world of the riverside and how every part of it was connected. He knew this landscape intimately – the silent, secret places where roe deer would lie up in the daytime, the setts where generations of badgers shaped their landscape, the sheltered woodland where elusive woodcock emerged at dawn. But he barely dared to hope he would see otters here.

Yet slowly and steadily – as otters received legal protection, the chemical load reduced and water quality improved – Britain’s rivers were becoming fit for otters again, and Lutra lutra spread throughout the country, re-colonising former territories and settling into both rural and urban environments.

The River Tweed had fared particularly well in the big clean-up of recent decades, with environmental organisations working in partnership with farmers and landowners to restore a more natural river system: opening up salmon routes, restoring natural curves in the tributaries, establishing woodlands and wetlands, meadows and ponds, all creating a river system better able to regulate itself and to support wildlife.

And so when otters found their way to the rich waters of the Tweed, Laurie was there with his senses finely tuned and his camera poised, ready to tell their story. As he set out on his long vigils at the riverside, he soon learnt that these river-dwelling otters were surprisingly different to those he had got to know on the coast. While coastal otters are out and about in the daytime, their lives governed by the tides, these river denizens slipped out at dawn and dusk, easily melting into the dark river.

And he knew otter spraint from the shore – full of little white bits that are the remains of crustaceans – and so had initially missed the spraint on the riverbank, which was smooth, black and tar-like. He realised he was going to have to go through the process of ‘getting your eye in’ all over again.

Now that he knew, he saw the subtle signs of their presence more regularly, such as tracks in the mud by the water’s edge and otter-width paths in the vegetation on the riverbank. By watching silently and keeping downwind, he began to see the otters themselves more often. Gradually he learnt to recognise individuals and families, to know the patterns of their days and the boundaries of their territories. 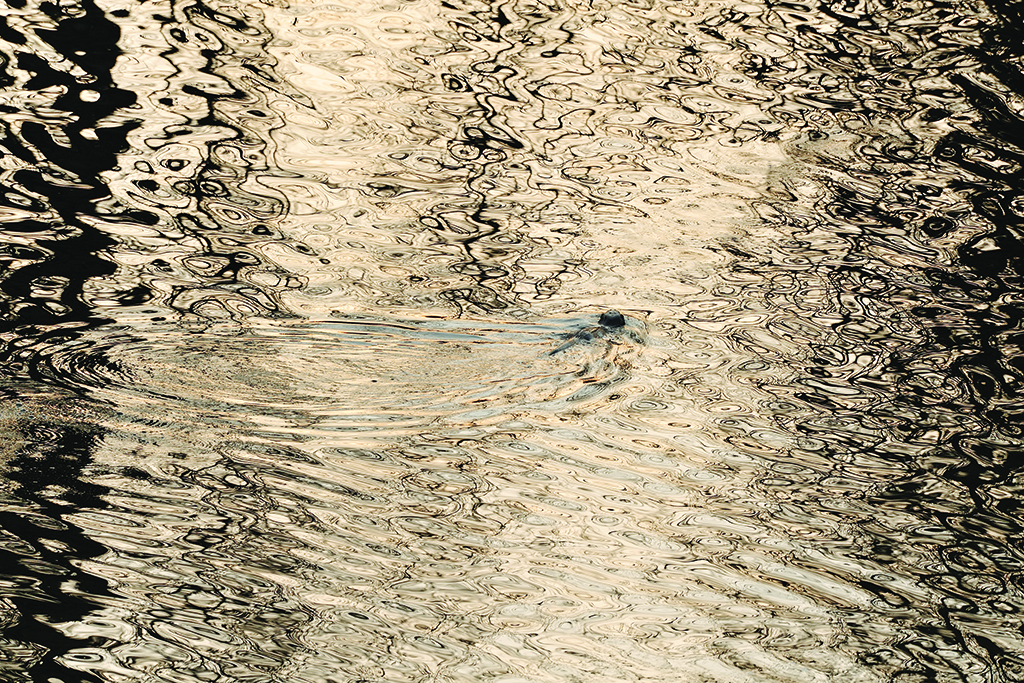 Over the years this work was enhanced by developments in both subject and medium: otter numbers have steadily increased, and new generations of otters growing up in busier sites have become more confident, sometimes appearing in broad daylight. Meanwhile, the advent of digital photography and continuing advances in technology have created cameras able to function at low levels of light, greatly enhancing the scope for working at dawn and dusk.

And now, 20 years on from that first glimpse, Laurie has clocked up thousands of hours watching otters on the Tweed: crouching in riverside hides, wading chest-deep into the water, leaning over bridges, and gleaning tips of sightings from walkers, anglers, poachers and water bailiffs alike. The resulting images tell the story of the otters’ lives through the changing seasons, and of the river that’s home to them and to Laurie.

Otters: Return to the River, by Laurie Campbell and Anna Levin (Birlinn, £14.99).

The RSPB in Scotland has used hotspot mapping techniques to learn more about the life of kittiwakes, guillemots, razorbills and shags as they forage a... Read More

The drooping saxifrage – a flower of Scotland

Saxifraga cernua, more colloquially known as the ‘drooping saxifrage’ is a common alpine plant across the Arctic. Read More