Popular Scots jewellery creator Sheila Fleet is holding her next Meet the Designer event in Jenners at Loch Lomond Shores next week.

Taking place from 26-29 July, this is a great opportunity to meet Scotland’s acclaimed jewellery designer and to view her very latest designs and hear about her current plans.

Sheila will be showing her new collection, Sea Motion, and some high value rings in rare metals.

Sea Motion will be launching at the international jewellery show in London this September. Those who’d like to see this trendy design before the world of high fashion should head along to Loch Lomond Shores.

Sheila Fleet outside her workshop by the sea

With its flowing design and vibrant enamel colours you might think of the sea when you gaze at Sea Motion, perhaps of a mermaid who has lost her finely-made purse. Sea Motion is inspired by the sea.

One memorable holiday Sheila was relaxing by the sea. As she watched the constant movement of the water and rippling waves she found the effect to be very calming. In these mesmerising moments she began to feel her creative side taking over and reached for her sketchpad.

Sea Motion is the culmination of that carefree, happy time beside the sea. It was Sheila’s desire to capture the essence of that moment, the dynamic flow of the sea, its glittering colour and ever-changing reflections. This she has achieved in sterling silver and enamel colours that almost seem to move. 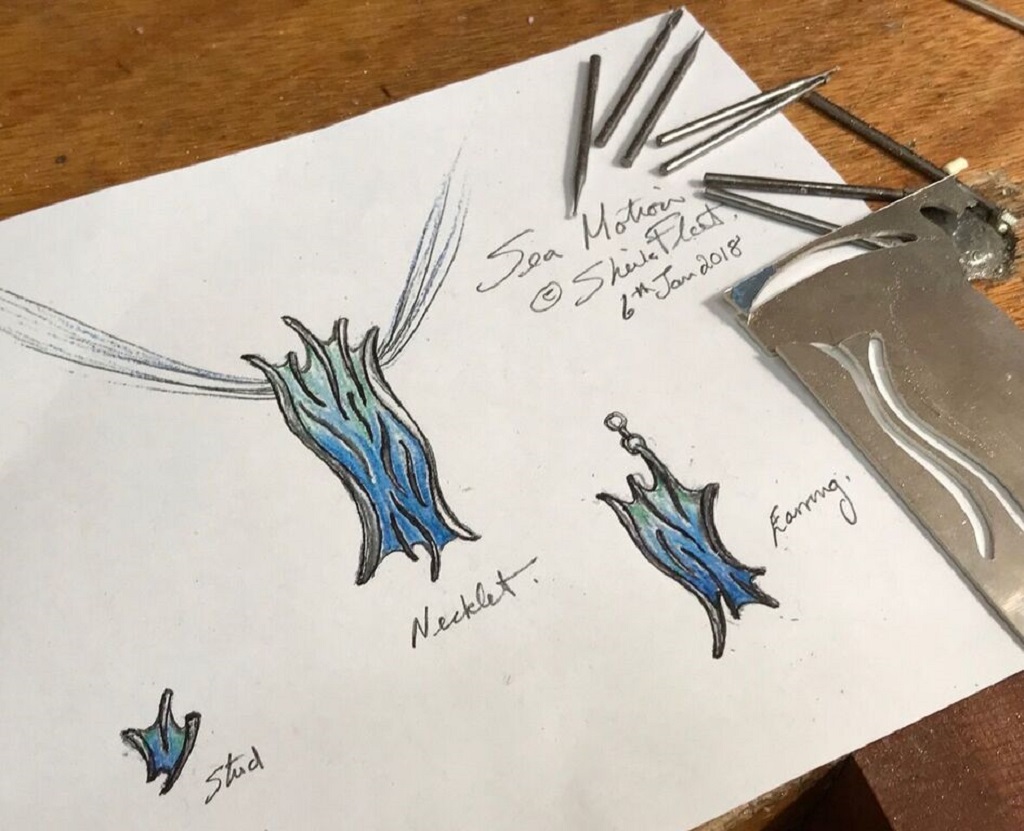 Sheila’s design concept sketches, on which the collection was based

Sea Motion joins a range of collections inspired by the sea. If you like Sea Motion there are many other sea collections you may like to explore along with many exciting designer rings.

Sheila’s designer rings can be made in silver, palladium, platinum or in different golds with bright gemstones all set by hand. Sheila can even offer Scottish gold at the moment. Those who are interested in having a ring made to order in this very special metal should ask.

Sheila makes all her designer rings to order. Why not have your finger sized while you’re at Loch Lomond, or relax and try on the new Sea Motion jewellery, bring a little bit of calming sea motion into the fast-paced flow of your daily life.

Sheila Fleet creates a piece in the Sea Motion collection

Sheila is offering 10% loyalty discount on all her silver, silver and enamel, yellow, white & rose gold, platinum & diamond jewellery. Offer excludes the Charitable Daisies but includes all the new designs.

An Edinburgh medical and cosmetic centre has won the best clinic in Scotland at the Aesthetics Awards 2019. Read More

Scottish entrepreneur and mother of three, Kate Stott, has been awarded Scottish Business Woman of the Year at the National Business Women Awards. Read More